i had the most amazing experience this week!! here it is:

Miracles are happening down in AZ! So last monday elder allred and i went over to pat and jerris house and taught them the last little bit of lesson 4. which consists of the law of chastity and the word of wisdom and things like that. ( i taught the law of chastity...fun stuff...even if they are an older couple) then we taught about the word of wisdom. they said that they drink coffee and that it is something that they both have been perscribed by their doctors. (my heart sunk at this point...i thought that they would hav to push back their baptisimal date). apparently jerri has been getting these migranes since she was 17 and the doctors have no idea what causes them or what medication to give her. she has tried all sorts of pills and the doctors found that a cup of coffee a day and some tylenol do the best job in subdueing the pain. then pat said that he found that coffee boosted his blood pressure the best out of anything. so when they heard that they couldn't drink coffee if at all possible they were pretty skeptical. we explained to them that it is a commandment that we are supposed to keep our bodies clean and free from addiction and shared with them 1st nephi 3;7 ( which says that the lord gives no commandments that we cannot accomplish). so they committed to give it a shot and stop drinking coffee. then we offered to give them priesthood blessings. elder allred gave jerri a priesthood blessing then i got to give pat a priesthood blessing (my first one!!!) i was nervous i will not lie. it wasn't the prettiest but i think it got the job done. but anyways after we did that we left their home. we planned to meet with them on thursday to see how it was coming. on thursday they told us that they have been off of coffee since monday and that jerri has had NO headaches whatsoever and pat went to the doctor on wednesday and has no more blood pressure problems!!!!!!!!!!! i couldnt believe it. we just wanted to jump and shout for joy right then and there. it was amazing!! the best part was on monday after we left their house and as we were biking home i said a prayer in my mind that everything would work out...and right then and there i got a spiritual witness that everything would work out and that they would be ready on Dec 18th. talk about an answer to a prayer!! such a testimony builder for me...if it werent for the lord none of this wouldve happened. crazy!!!
Posted by The Battle at 9:39 PM No comments:

I went on splits with my district leader Elder Gomez who is from spain and i learned so much it was ridiculous. my knocking has become about 500% more effective and all i did was change one thing, instead of saying "would you be interested in this" at the end of explaining something that we teach i say, "do you have time now or is there another time that we could share more of this message with you" it works really really well.

This transfer is Temple transfer so i went to the LA temple this morning and that was sweet its HUGE it was really cool and LA looks exactly like the postcards like i felt like I had already been there cause it all was very familiar, 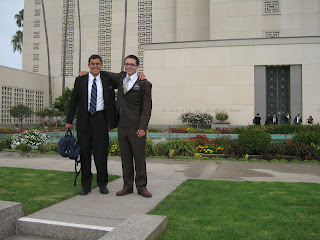 on last Wednesday i think it was we went by a members house randomly that we had never stopped at before and i walked into there house and the 3 of the 4 foster kid investigators that i taught in my area in whittier like 4 months ago were in the house! it was crazy definitely a miracle that i just happened to walk in the house on a random day at a random time and my old investigators were in there so i taught my old investigators a lesson it was sweet! then on sunday i saw them at church because when i was teaching them before they were going to a different ward with their foster mom because they knew people in the other ward and it turns out that im in there ward so i saw them again! so i get to see my old investigators once a week now its pretty dang sweet. 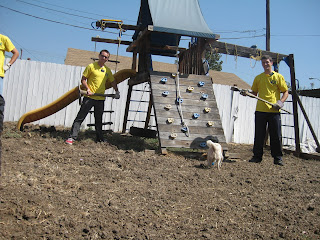 This excerpt is from September: So this week has flown by just like the rest, its been a crazy week. so first off its been really really really hot this week, ive been drinking about 6 water bottles a day and everyone we knock into has been giving us water bottles because we look like we went to a water park because we are sweating so much. my shirts are always drenched by lunch time yesterday it got up to 109 degrees and we were riding our bikes up a whole bunch of hills so ya... it was hot. 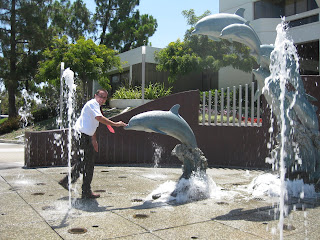 Olympus Elders took over the MTC when Steve was there: 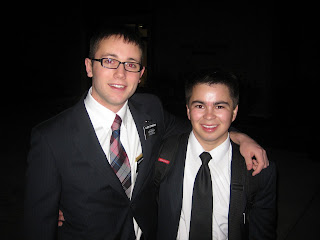 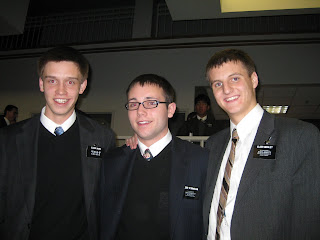 Posted by The Battle at 8:50 PM No comments: