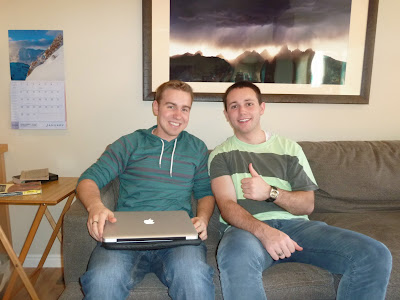 Posted by The Battle at 8:18 PM No comments:

This email came to Scott's family this week. Here are some excerpts:

I got surprising call yesterday... President Pingree called and gave me some sad news... Im moving areas. Im going to be in the English Program serving in a singles ward. haha. It will be interesting. And i guess the Lord wanted to pull a fast one on me and call me as an assistant to the President. Yep... a lagre change none the less. I really am going to miss the amazing families we have been teaching but they will be in good hands. The missionary who is taking my place is amazing and well.. its just feels right. These families will be in good hands and if all goes right ill be coming back to see them get baptised. Thats the goal.

When president pingree called me he told me he had been praying a lot to see who should full the opening as assistant and my name just keep coming to mind. To hear that made me feel a little better. I guess the Lord knows where he wants me to be no matter how i feel about it. Im just gonna trust him and do my best... thats all i can really do. It a big responsibility though. Having all 200 missionaries look at me as an example puts a lot of weight on my shoulders.... but i know ill learn a lot from it. SO... im going to be grateful and take advantage of this opportunity. We shall see.....

Lots of stuff happened this week. First off.. la familia Violante came to church...YES!!! i was stoked out of my mind grapes.

the best night was probably when we decided to help Edith out (the mom) and buy a really good dinner for their family. She usually has to cook for her family and pick everyone up from work and school after a long day at work making air filters on a assembly line and starting at 3am. So she is always exhausted... but just so happy and kind... always inviting us in. Anyways, we brought them over some pupusas (pretty much thick tortillas with cheese or beans of meat inside) which were amazing and they loved them. We just talked about Honduras and had a good time and after had an amazing lesson about Faith... and how we show our faith. Thats when they decided to come to church... like this time for real. He has always wanted to but this time it was a legit YES...and they came and it was awesome. We had a huge scare when they were there because our Bishop (who is just a really different guy) took them into his office on their way to class. I was so nervous because it was their first time and thats a little awkward... but it ended up being ok. They talked about marriage and the temple and nothing crazy happened. I was just glad that bishop didnt make them join the cult..haha.

Also another miracle this week. So if yall remember Rueben Juarez, that 18 year old who we were teaching a while ago but got pulled over with possession of weed and went to jail, we actually had the chance to visit him the other day in immigration. It was wierd... we were just driving home from the temple and i felt randomly that i needed to call president pingree and ask permission to go and visit him in the jail. The jail is pretty far out of our area so i wasnt sure what he would say. So... he said yes. When we got there he was so excited to see us. He told me that he had is court that day and was going to be deported in a matter of hours. MIRACLE. We were able to get him a Book of Mormon to take with him and when he held it it ws like he was holding gold. We talked for like an hour and he told me that he had been going to all the other services in the jail, catholic, Methodist, Baptist... and he said im not the biggest fan. I WANT TO BE MORMON. and when i come back i want you to baptise me. I was pretty stoked on that. It made me feel like i actually made a difference with this kid.

I went on exchanges this week and we went and had lunch at a retirement home. To be honest it was really nice. We meet a guy there who is less active but still has a strong testimony....But pretty much he the retirement home ladys man. haha. He would wink at all the old ladys and say HEY BABY and hit they in the bum with his cane. Way funny guy. I had liver and onions for lunch. I thought i would take in the culture of the place and eat old people food...haha.
Man... the mission is a good thing. I couldnt be doing anything better.

Y'all have a good one.

Elder Litton
Posted by The Battle at 11:37 AM No comments: 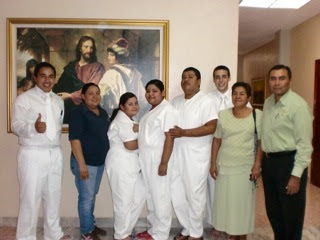 This photo is of an entire family he finished baptizing this week - Dad, Mom, 2 daughters and Grandma and Grandpa. The Morales Estrada family.
Posted by The Battle at 9:38 PM No comments: