Guess what? I'm a language giant now, so I can officially start learning chracters. Speaking is more important, but characters really help you understand that they're just freaking cool.
I've been studying about hope this week. To me hope is really just having an eternal perspective and knowing that everything in this life is given to us as a blessing. If we hold on to that perspective we can make it through anything. 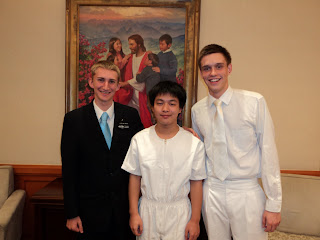 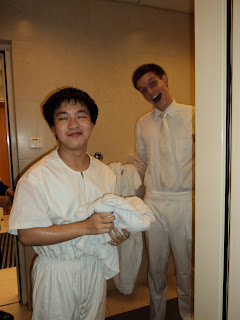 Peter's Baptism
Peter Wong was baptized on the Sunday after conference. It was so awesome! Peter is 16 and we met him just walking on the street. He was so open to everything we had to say, it seemed like he already knew many of the gospel principles. His parents signed for him to be baptized and his mom even came with him to a conference session.
So yeah, the baptism. Peter came to church wearing the white shirt and tie we bought for him and he was just ready to go. Then after conference we changed our clothes and had the service. I was pretty nervous, not gonna lie. My first baptism, saying the prayer in Chinese and the water in the font was pretty low, but it was fine, no worries. It was so funny; after it was done, Peter just said "gam faai?" - that fast? I was kinda thinking the same thing. Baptism is so simple but so important. He was so happy afterwards. It was an awesome experience. 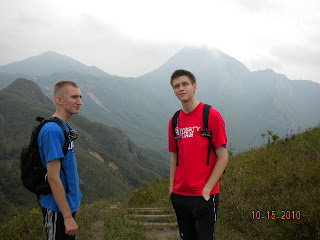 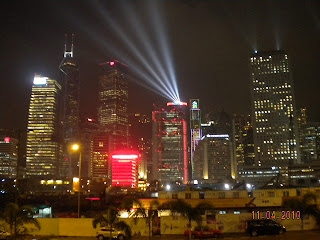 Light Show from the Star Ferry Pier on the Island

This Week we had mission tour and President Perkins the Asia area President from the 70 came and just taught us for 6 hours. It was so amazing I learned so much. My testimony of General authority's Divine calling really strengthened. there were a couple things that stood out to me that aren't just mission related. At the beginning of the meeting he noted that in scriptures the lord says something along the lines of "ask and ye shall receive, knock and it shall be opened 75 times, and said that asking questions is the key to revelation. So he had us write down 2 questions and promised us that those questions would be answered before the end of the meeting. After the meeting he had everyone who had 2 questions answered raise their hands, and everyone did. it was pretty cool. Asking question just opens the door to revelation, so just ask. pretty simple really. Also he broke down the word ENTHUSIASTIC which when broken down means in a godly state, so the best way to be Enthusiastic is to develop Christ like attributes, I just thought that was interesting, and if we all want to be "an example of the believers" we definitely need to be enthusiastic about the Gospel. The last thing that really stuck out to me was that we talked a lot about love. The love of God, the love of the Savior, and the love that we need to have for our Fellowmen. Love was something that I was so hyped up on in the MTC, but that I've kinda let fall by the wayside out here. It's not that I don't love the work, or the people, It's just that I wasn't letting love motivate everything I was doing. When we let love motivate us everything is just better, we'll be happier, we will make others happier, and there is no room for and negativity, or anger. When we see everyone as Children of God, as our brothers and sisters, we will be filled with love for them. So the phrase "Let Love Motivate" has Just been running through my Head since, It's just so important. At the end we had a huge testimony meeting which was awesome! a room full of missionaries bearing testimony is pretty powerful. It really strengthen my testimony of this Restored Gospel so much, and just how much God loves us to Restore the fullness of the Gospel through Joseph Smith. We are so blessed to live in the fullness of times, and I feel so blessed to be here in Hong Kong Sharing the message of the Restoration, and helping others receive the fullness of God's Blessings. Just too blessed.
Posted by The Battle at 9:58 PM No comments:

In MTC with Elder Peterson? 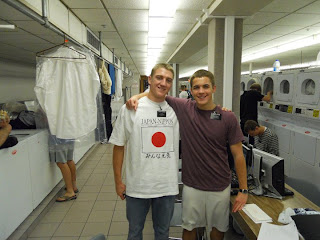 Posted by The Battle at 9:50 PM No comments: 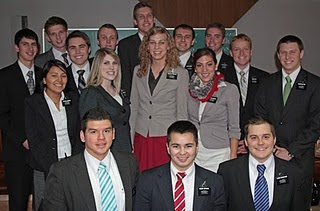 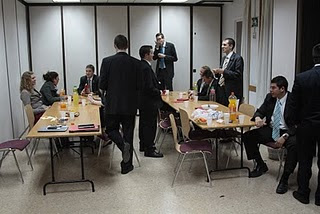 Jose's district had a Mini-Mtc, including a paella lunch. These are photos from the Spain Barcelona blog. Can you spot Jose?
Posted by The Battle at 9:46 PM No comments: 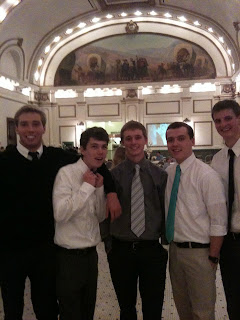 Posted by The Battle at 8:08 PM No comments:

So this has been a pretty good week. We pretty much knocked doors...mostly in trailer parks...and talked to everyone we saw all day every day. And well, it worked how we wanted it to work...we have more people to teach. About half speak only spanish so I'm stoked on that. Investigators are a little hard to come by around here, especially hispanic investigators, so when we have one we don't want to screw it up so my comp dosen't really let me speak (or at least try and speak) as much as I would like but that's ok...listening helps too.

We knocked on this lady's doors whose name is Maria. Spanish name but go figure she prefers to speak english. Anyways she let us in and pretty much the first thing she said was I was born a catholic and i will die a catholic.... but despite that she was willing to listen probably because at the begining we were willing to listen to her. She has had a hard life...she has two sets of twins die as babies and her husband took her kids away for like 7 years when they were young. She is now a grandma and lives with her son in a little town called Brookshire. So well...to make a long story short we taught her the first lesson...The spirit was so strong. We were towards the end and we were talking about how you need to pray if you want to know and she stopped us....She said "wait a second...just let me tell you something" My companion and I were like NOOOOO...it was going so good but then came her reply, "I feel you are an answer to my prayers" She said I wasn't gonna say anything but I feel the catholic church is becoming to commercialized and this might be what I'm looking for.... so we promised her it was and at the end we asked her to pray. She said she wanted one of us to so I said after I pray it will be your turn.....and then I prayed and said amen and kept my eyes closed and my arms folded and waited....I think my comp was a little confused too but I just sat there and waited and then she started to pray...it was awesome. We left her with a Book of Mormon...all we had were spanish and she could not read well in spanish but Elder Rupp promised her she would understand it if she truly wanted to cause God didn't want her to wait.... Anyways we go back to Brookshire soon so we will see how that went. It was a pretty good spiritual boost. We found a few other investigators this week that had lots of questions and we have appointments with them so I'm pretty stoked on that. Its a pretty slow area like I have said before so its good to have some people and i feel like if we keep working as hard as we have we will find more. We helped a few inactives come to church this week so that was good too. Well....that's about it. Hope everything is going good for whoever this email goes too..
Posted by The Battle at 6:57 PM No comments: